A lot has changed in the Elixir community since I wrote my previous post on this topic.

The number of needed plugins has gone down. That’s a good thing! It means that the quality of the options is higher. I’m breaking this into 2 categories.

NOTE: Install these plugins through Atom’s Settings > Install. See the Atom Editor website for getting started with Atom.

Must Have Elixir Plugins

The new one here is atom-elixir. It wasn’t available the last time I reviewed the options. It does such a good job that it replaces multiple other plugins.

Here’s a little on how it works. There is a project called Alchemist that was created for supporting Elixir in Emacs. A spin-off project (by the same author) called alchemist-server aims to make that same Elixir information available in an editor-independent way. The atom-elixir plugin leverages alchemist-server to do all the hard work on getting Elixir intelligence and makes it accessible in Atom.

This is meaningful to me because it indicates that support and features are more likely to continue.

I want to draw special attention to the atom-elixir plugin because it still has relatively low download numbers but is my personal go-to tool for Elixir development. I believe more people need to know about it. And no, I have nothing to do with the project or the people involved. :)

Screenshot of the auto-completion window:

Screenshot of the documentation tab that opens on demand: 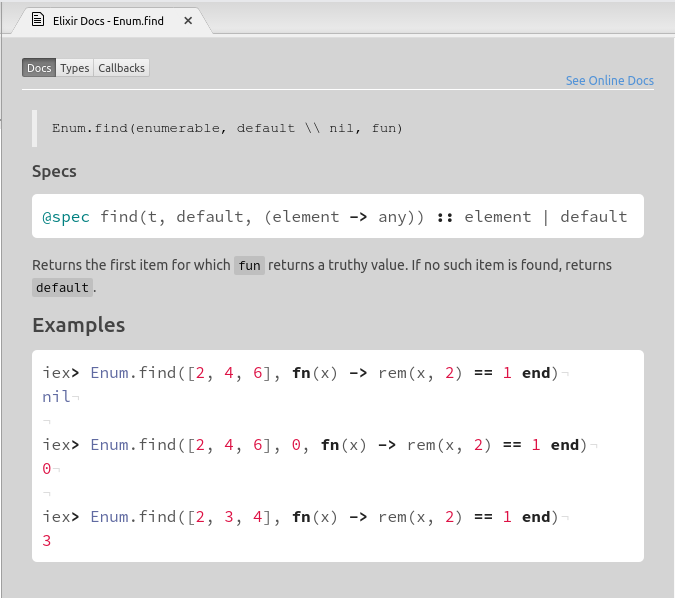 Check the shortcuts for your platform, but with a cursor on a function, I press atl-down (arrow) and it performs a “goto-definition”. I can then jump again and again going deeper. Then, using alt-up, I can pop the stack and jump back to where my cursor was at the previous point. This jumping back keeps popping the stack to eventually return me to the first jump point. I really love this feature!

It’s been fun working in the Elixir ecosystem and community. Lots of great advancements have been made in a relatively short time. I can’t wait to see how things improve and change going forward!

Here I highlighted a small number of Atom plugins that help with developing Elixir applications. If you aren’t already using atom-elixir, you should try it out now.