This is a short guide on getting started with Elixir and setting up a development environment using the Atom Editor. I chose Atom because it is OpenSource, free, cross-platform, highly hackable and pretty darn cool to use too.

Oh, it also has packages that give good support for Elixir development.

Atom’s packages can be accessed here…

There are a number of general interest packages that are a good idea to install first thing. Some of these are in the Featured Packages.

Here are a few that I like and recommend for getting started. I include a short description of their function so you can more easily decide if it matters to you.

The choices of Elixir-related packages is growing and changing. Since we are still in the early days of Elixir adoption, it is worth re-visiting the list of packages from time to time.

For working with Elixir code, there are a few options. Here’s an overview of where it stands at the time of this writing.

Find and install the following:

In Atom, open the settings page using ctrl+, or cmd+,. Select “Keybindings” to see all the keybindings available to you. You can override/customize your keybindings in the keymap.cson file. There is a link to open it at the top.

Personally, I like the ctrl-alt-l down keybinding to open an IEx terminal tab below my working files. I mostly just use it for running tests. Disable or change the ones that don’t make sense or conflict.

There are a few features of the IEx Atom package that don’t work well. At least not at this time. Feel free to disable the keybindings for those specific features.

Below is pictured the IEx tab having run the tests for the current file. 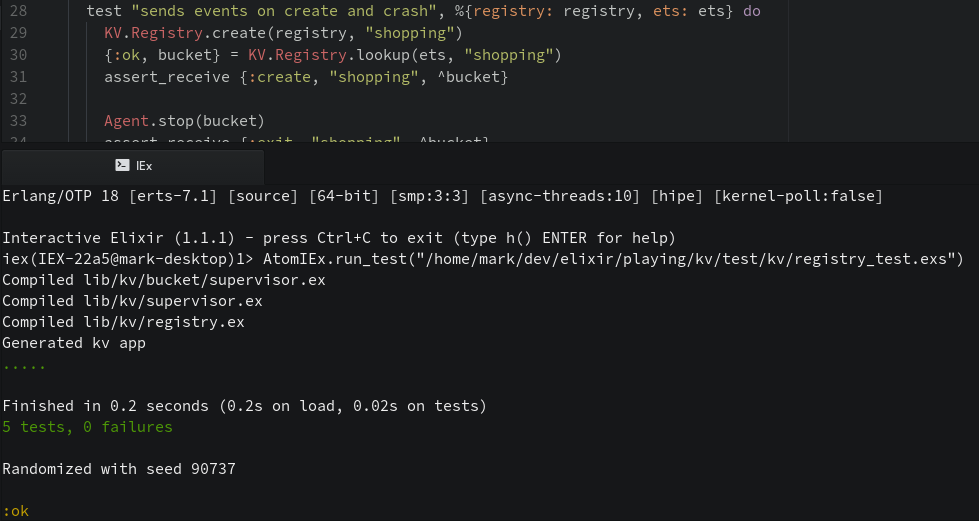 When you have an IEx terminal open and you’ve made code changes that you want to be available to play with, you need to “reload” the changes.

Using one of the IEx shortcuts for running you tests, do that. It outputs on the first line the command used to do it.

A simple automatic package that compiles the project when a file is saved, parses any compiler errors and highlights the line with the error and adds a bubble with the compiler error message.

It requires the package “linter” to report the errors through, so make sure to install that too.

Oops. Looks like a Rails hash habit crept in there, it should have been “{name, pid}”.

In IEx, the h command will output the help for the fully namespaced function or type.

Example of help on the IO module.

Example of help on the IO.puts function.

The elixir-docs package is doing the same thing. It is apparent that it taking the IEx help output, formatting it as HTML and putting it in a pane in Atom. Still, this can be helpful. Note it will also work for your own documentation.

Currently, the docs pane must be opened. This can be toggled through the Atom Command Palette or configuring a keybinding. Once open, select a fully namespaced type or function and use the keybinding to activate the documentation for it. (Linux is ctrl+alt+i). 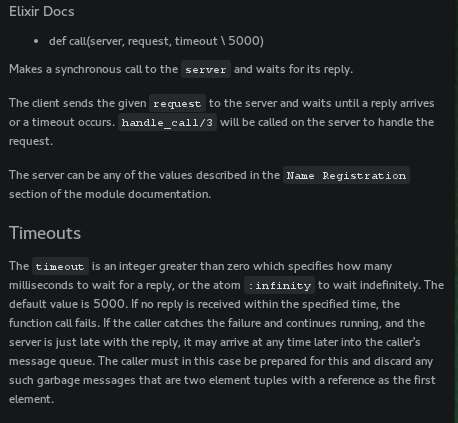 The Autocomplete-elixir package is a great one. It runs a BEAM that compiles your project and can inspect it. It shows an auto-complete popup with context-aware options for completing your statement.

To get it working, there are is a currently not-well-documented setting that needs to be set. In the autocomplete-elixir package’s Settings, there are two inputs for giving the path to your Elixir and Erlang directory. 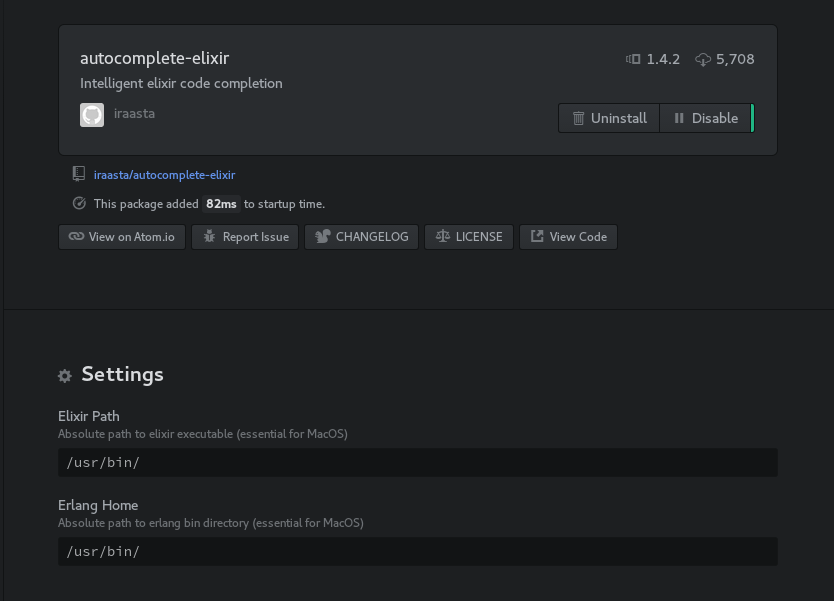 As show, these are the settings for my Arch Linux system. /usr/bin. For Mac it may be /usr/local/bin. To find out, on a terminal type:

Then enter the path not including the binary program elixir and erl. So it is just the directory portion. Currently this isn’t documented well and it doesn’t give a friendly UI error if you enter an invalid directory. Instead, if in Atom you View > Developer > Toggle Developer Tools, you might see many errors about the path not being a directory. Additionally, on my system it spawned a bunch of beam.smp processes that I had to kill.

Once the settings are correct, this is how it works.

Start typing and if your Autocomplete is set to auto-suggest (the default), then you should see it suggest some options… 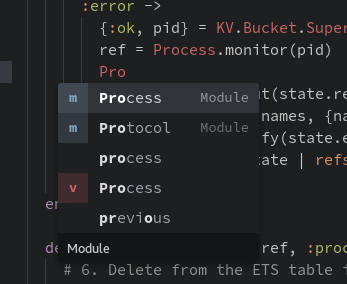 As you go further, it continues. Notice at the bottom it tries to show the @spec information for the highlighted function.

When you make the final selection, it populates suggested arguments which remain selected so as you type they are automatically replaced.

This package is my favorite. It helps prevent simple typos and helps me discover modules and functions.

Elixir is still a young language. Atom is still a young tool. However, both are turning into mature platforms and something worth investigating further. Atom has a number of packages (aka plugins) that make working with Elixir more pleasant. While there are still things to improve in Atom, I’ve been enjoying it a lot.

Atom is OpenSource, cross-platform, and free. Also, it is the most hackable editor I’ve ever used. You can really dig in and tweak it to your liking.

Give Atom a try! Download it for your platform on Atom.io